Different strategies have been evaluated in order to mitigate the negative energy balance during early lactation. Some of these include use of oral drenches and pastes to feed glucose precursors such as calcium propionate, propylene glycol or liquid glycerine, to minimise ketosis disease and the associated fresh-cow metabolic disorders. Such interventions may work but their effectiveness is often transient if not limited. Furthermore drenching the animals to deliver the glucose precursors involves restraining which at times require specialised personnel

Glucose substrates added in liquid form directly to the rumen have limitations in alleviating the symptoms of ketosis. Firstly, they undergo rapid microbial fermentation and lower rumen pH with a number of consequences. These include risk of rumen acidosis, depressed fibre digestion, drop in milk fat and reduced dry matter intake. Secondly, there is a shift in the pattern of volatile fatty acid production with increased yield of butyric acid which overloads liver further with more ketone bodies thus exacerbating the fatty liver-ketosis complex

UFAC UK have developed a unique process of protecting glycerine inside the matrix of fine particles of vegetable fibre that ensures the glucose precursor escapes rumen fermentation, is slowly released, gets absorbed in the small intestine and delivered directly to the liver for the production of glucose. Glycerol is a more effective treatment against ketosis in dairy cows when administered in this manner. It enters the metabolic pathway to glucose in a different location than other glucogenic precursors and as such is more beneficial to the cow. 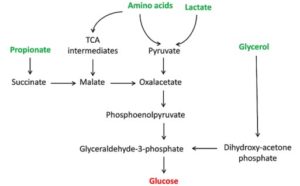 In West Wales, a well-managed dairy herd of 250 holstein-friesian cows with a rolling annual average of 11,000 litres and calving interval of 405 days, glycerene was fed from three weeks pre-calving to 21 days into lactation. Herd performance was as follows:

Effect of glycerene on cow performance

According to Cornell definition, cows with NEFAs above 0.7mmol/l and BHB of more than 1.0 mmol/l in early lactation have increased risk of post-calving diseases (displaced abomasum, metritis/retained placenta and clinical ketosis), decreased milk yield and reduced reproductive performance in the first 30 days in milk. Recent studies at Royal School of Veterinary Studies in Edinburgh, UK confirmed these relationships between the blood parameters and risk factors in cow health.

Despite the high level of management at the farm glycerene was still effective in maintaining the BHB concentration in the blood below the threshold level and improved herd performance.

Feeding glycerene to transition cows clearly has a number of benefits:

Feeding your cows UFAC UK glycerene makes all the difference.

For further information please contact our technical department on 01780460327 or technical@ufacuk.com