Swapping a straight oil product for one containing a balance of oils including the essential omega 3 oils from marine will help improve fertility this winter.

Swapping a straight oil product for one containing a balance of oils including the essential omega 3 oils from marine will help improve fertility this winter according to Mike Chown, National Sales Manager with UFAC-UK.

Getting cows back in calf quickly, based on strong exhibition of heat and high conception rates with low levels of embryo mortality will be high on ever farmer’s list of priorities this winter. Research shows that ensuring cows are receiving sufficient amounts of omega 3 from marine sources and reducing the omega 6: omega 3 ratio to the optimal 4:1 in the transition and fresh calving rations, can have a significant effect on fertility success without adding significantly to diet cost.

The principle omega 3s, EPA and DHA are not supplied in most current ruminant diets, so cows have to produce them from other sources. Modern thinking is that cows have to rely on producing these long chain omega 3s from the shorter chain omega 3 (C18:3) that are found in reasonable levels in grazed grass but lower quantities in conserved forages. Research proves that this is not an effective process, leaving cows short of these essential fatty acids.

In addition, as previously stated, effective diets need the optimum ratio of omega 6 to omega 3s, of 4:1. UK diets generally do not achieve this ratio for two reasons. The first is that grass is low in these essential oils and they are not routinely added to compounds and blends.

The second is that the rationale for adding dietary fats is to improve total energy and/or butterfat percentage through the addition of saturated fats such as C16:0 and calcium soaps, while omega 6 would usually be supplied in vegetable oils.

Consequently, UK diets will tend to be deficient in long chain omega 3’s which will impact on reproductive performance.

Omega 3 and 6 oils play vital roles in dairy cow fertility particularly with regard to progesterone metabolism which is the hormone which plays several crucial roles in fertility.

The first role is ensuring a strong follicle which results in larger, more viable eggs and increased strength of bulling behaviour. Together, these will help reduce calving to conception interval.

Graph 1 looks at the effect of adequate supplementation with omega 3 and 6 on conception rates. The red column shows the optimum 4:1 ratio, while typical UK diets are represented by the orange column. The difference in conception rate is an increase of around 12%.

The second role is in reducing embryo mortality. Early embryo loss is a major contributor to extended calving to conception intervals, reduced pregnancy rates and increased culling. Progesterone is the hormone intimately involved in embryo implantation. The correct levels on omega 3 and 6 stimulate higher levels of progesterone and lower levels of prostaglandin which together help reduce early embryo mortality.

Graph 2 shows the effect of different fat ratios in the diet on embryo mortality. Feeding the optimum ratio of omega 3 and omega 6 reduced embryo loss by over half compared to typical UK diets.

By feeding sufficient omega 3 and omega 6 at the optimum 4:1 ratio it will be possible to influence the probability of getting cows back in calf more quickly. This can be achieved by varying the ratio of fats added to the diet.

For example, if a diet was being supplemented with 300g/day of a calcium soap, a cost effective solution would be to replace 100g of the calcium soap with 100g of UFAC Omega 3 supplement which provides long chain fatty acids which are not synthesised naturally, in the quantities required for reproduction and immunity. The energy provided would be the same but the fat balance would be greatly enhanced.

With calcium soaps costing around £750/t and omega 3 supplement also £750/tonne the diet cost remains unchanged, although a bit more time and organisation would be required at feeding as two fats would be added.

However, the benefits in terms on better reproductive performance, reduced semen costs, improved longevity and the opportunity to reduce heifer rearing costs can be considerable. 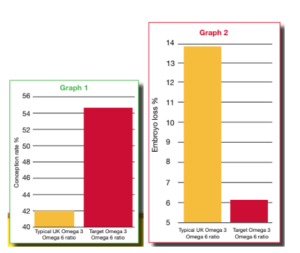