In twelve months, Charlie Morris from Edgeborough Farm near Taunton has put 800 litres on his rolling yield per cow

In twelve months, Charlie Morris from Edgeborough Farm near Taunton has put 800 litres on his rolling yield per cow with all the increase coming from better use of forage, as a consequence of diet changes that have improved rumen function.

Charlie farms the 500 acre farm in partnership with his parents John and Rachel. Herdsman Colin Hiscox is involved in the day to day operation of the herd. The emphasis has long been on maximising contribution from home grown feeds to the 120 head herd of cross bred dairy cows. Initially Holstein Friesians, Norwegian Reds and Flekvieh are being used to improve longevity and fertility.

Around 250 acres of arable crops are grown every year with 190 acres on a share farming agreement while the other 60 acres are used to grow wheat and beans for the cows. The remaining 250 acres are used for forage production with 30 acres of maize grown per year. There are 75 acres of cutting leys which will be cut six times a year. Charlie is an advocate of multi-cut systems, arguing that if you grazing every 3-4 weeks to optimise quality, then you should cut silage at the same interval.

All cutting leys are down to grass and red clover mixes and he reseeds 20 acres a year. The red clover has raised the protein content of silages by 2% and this year’s first cut was taken on 20th April. Around 40 acres of permanent pasture are used for ‘grazing’ by the milking herd. A further 60 acres are grazed by dry cows and youngstock. 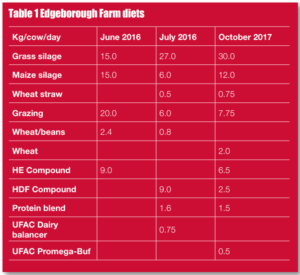 Robot system
Charlie was one of the first farmers to move into robots when he installed a Merlin system in 2000 when he had 70 cows.

“We looked at the economics of employing a herdsman and they did not stack up but robots offered an alternative,” Charlie explains. “I liked the idea of more regular milking to reduce stress on the cow too.”

The all year round calving herd are TMR fed with concentrate through the robots. From late March to early November cows are allowed out to graze in the evening when they have been milked. It is seen primarily as a way to give cows exercise and no more than 5% of the diet is assumed to come from grazing. In the winter they are fed a TMR diet twice a day.

Last summer Charlie began working with independent nutritionist Andrew Jones as he was concerned that milk from forage and overall performance was less than it should be.
An initial assessment suggested several changes would improve performance. “Looking at the diet I felt cows were in need of more energy and DUP,” Andrew comments. “There were also signs of SARA with frothy dung.

As the diet comprised grass and maize silage, a homegrown blend and a high energy dairy cake, the first step was to change the blend and increase the amount of protein. “To complement the home grown wheat and beans we added a protein blend comprising Hipro, rape and soya hulls (see table 1). Later we also looked to make full use of the two feed heads on the robots by targeting compounds by stage of lactation.”

Targeted compounds
Initially all cows were switched to an 18%HDF compound. Now a 21% HDF is fed as a base compound to all cows, providing low energy and high protein. High yielders receive 2.5kg of the 21% cake in addition to a 16%HE cake to provide the additional energy required. The aim is to target cows better while reducing the overall cost of concentrates.
“I was also concerned at the acid load in the diet so wanted to buffer the rumen to improve overall rumen function to get the most from forages. Low DUP in the original diet would be having an impact on fertility while with yield being pushed we needed to make sure we maintained milk quality. “To help achieve these three objectives we added 0.75kg of UFAC Dairy Balancer to the diet. Diary Balancer is a mix of three proven UFAC products – Glyco-Buf, Promega & Buta-Cup Extra.”
Glyco-Buf is a unique calcium-glycerol product which helps maintain optimum rumen health and fibre digestion thereby increasing dry matter intake. It also supplies glucose direct to the liver to drive up milk production. Promega is a unique combination of quality proteins and essential fatty acids derived from highly digestible oils and is as close as it is possible to get to traditional fishmeal with none of the draw backs.
Buta-Cup Extra is a specific, balanced blend of fatty acids derived from highly digestible oils and C16 fats combined with glycerine to give a highly palatable free flowing meal, designed to help drive milk quality throughout the year. “The Glyco-Buf improves rumen function by controlling SARA. Promega helps improve the overall protein and DUP supply. It improves the health and fertility of the cow through the availability of the fish oil which provides essential fatty acids including EPA and DHA. The cow cannot produce these herself but they help drive egg quality and size, leading to more viable pregnancies. Finally Buta-Cup Extra helps improve energy density and increases fat production. “By providing all three supplements in one bag, feeding is more straightforward and more accurate.”

The results have been significant (see table 2). Milk yield has risen by over 10% in a single year with no increase in concentrates used. Milk from forage has increased to 33% of all production and yield of fat and protein per cow has increased too. Feed cost per litre has risen marginally, reflecting the increased protein blend but concentrates are now more targeted through the robots.
C16 removed “We recently reviewed the diet and based on price have decided to take the C16 fat out of the diet, replacing 0.75kg of Dairy Balancer with 0.5kg of Promega-Buf, a mix of Promega and Glygo-Buf. As rumen function is optimised with an effective acetate fermentation we are hopeful butterfat production will be unaffected.”
Charlie Morris is delighted with the results. “We are getting more milk from forage, achieving higher yields with a more sustainable cost. Feeding a consistent diet has clearly helped and adding three supplements from one bag makes feeding more straightforward. And when we decided we could remove the C16 on price, we just swapped to a product containing the two supplements we needed.” 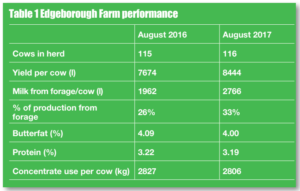